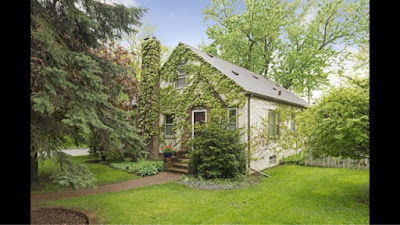 I am sitting here drinking my coffee (French pressed) with heavy whipping cream (always), and thinking how grateful I am to my dear friend, Laura, for introducing me to the art of fine coffee making.  She swears by the aeropress method, but I lost the cap–probably tossed it with the coffee grinds last evening.  When I was new to the world of coffee,  Laura gave me a single-serving French Press with select coffee beans from a local roaster. The French Press method is still my favorite due to its full-bodied flavor.  I use the full size press to brew coffee for my gang and myself every morning.   Unfortunately for us, Laura and her gang are moving to Maine which is an exciting move for them.  While she is realizing her dream of a Maine life, we are soon to realize ours of returning to Minneapolis.  I won’t say that “change is good,” as obviously that is not always true.  But, some changes are really good, especially when they involve access by foot or car to fanatastic coffee beans–both of which Portland, Maine and Minneapolis, Minnesota have.  Cheers to the Larrsen family as they start a new adventure and to us as we begin ours. 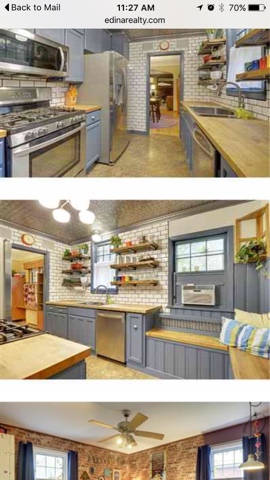 A screen shot from the listing of the adorable small kitchen💞

The house we are purchasing has been removed from Zillow, which has to mean it’s offially ours! 😉 I liken it to an engagment:  it is off the market, even though the deal has not been legally signed by the state.  Our ceremony (closing) is the second week of July.  We were hoping to close the third week of June when the girls are in Tennessee, but the current owners would be out”on the street” so to speak, and we are not quite that impatient.  We are going from 5,200 sq. feet to 2,200 sq. feet. We decided to either rent an apartment or buy a small house while we wait for our Iowa home to sell.  But, this adorable house may be “the one.”  I sent my Aunt Karen (our dedicated realtor) a list of nine small houses last week that we wanted to see over the  weekend.  She checked them out, and sent me a response that six out of nine had offers on them, and then the next day the other three were gone too.  Yikes!  The larger properties we have been looking at over the past few months are still on the market, but the smaller homes tend to be gobbled up fast. When the little ivy covered English Tudor came up on Monday, I sent the Zillow link to Andrew.  Seeing how competitive the market is for small houses, it was too risky to wait until Friday to walk through. I texted Karen and asked if she would be willing to look at it for us. She generously was. Following her walk-through, she had the savvy of a seasoned realtor to contact the selling agent immediately. She notifed him that her buyers were putting in an offer that afternoon. Her quick action secured us first spot in the bidding line–thank you Auntie Karen!! She recommended that we offer more than the asking price as there were several people interested. We put in a generous offer that evening, never having seen it. We knew that we could back out if the inspector found something we didn’t like.  Plus, we assumed that this was a “temporary” dwelling just to get the girls up in time for school to start.  However, we absolutely love it!  We are so in love with the house, the neighborhood, the walkablity to shops, restaurants, grocery stores, the lakes, trails etc…it’s perfect.  *sigh*  We may never leave. 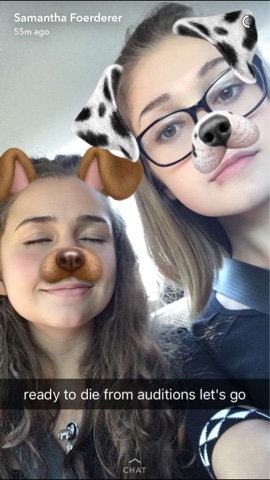 A snapchat pic before their audition. 😉

We didn’t walk through the house until Sunday.  Saturday the girls had orchestra audtions for “The Greater Twin Cities Symphony Youth Orchestra.”  They were both miserable all day Friday and three-quarters of Saturday dreading the looming audition. “Do one thing every day that scares you,” said the wise Eleanor Roosevelt.  And, the girls were terribly scared.  After an hour of recovery time following the audition and eating a fine meal at the “Holy Land Bakery,” (one of our favs and who happened to cater for our wedding) they were feeling optimistic and chipper.   Honestly (and thankfully), the girls did not want to return home after being in Minneapolis.  They love the house, the yard, the lakes, the restaurants, the “Minnesota nice people,” and simply the excitement and complexity that comes from the richness of city life. While swinging in the backyard on Sunday of our home-to-be, they both agreed that they wanted to kick the current owners out “now” so we could move in and not have to return to Iowa.  🙂  Six more weeks girls, and we will be urbanites again!! 😎😘 Thanks as always for checking in. ❤️ xoxo ~Autumn 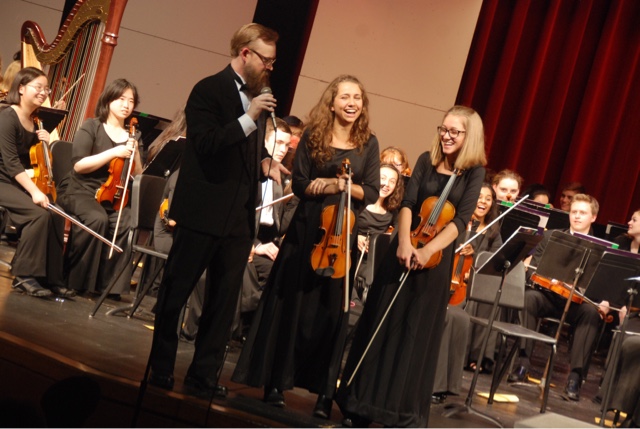 During the high school’s final concert, Mr. Swinney called the girls up to the front and thanked them for their leadership and contribution over the years…so very nice of him. 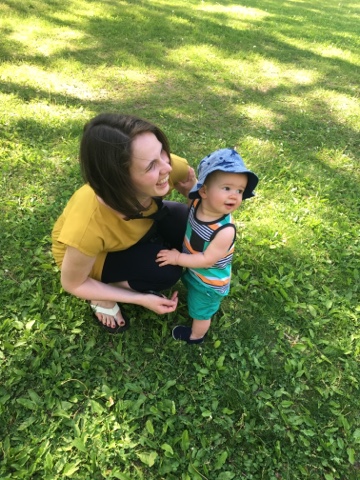 My beautiful sister-in-law and nephew. Two benefits to look forward to in MN.